Code of Ethics for Government Service

CODE OF ETHICS FOR GOVERNMENT SERVICE

DISPLAY IN FEDERAL BUILDINGS OF CODE OF ETHICS FOR GOVERNMENT SERVICE

Public Law 96-303, July 3, 1980, 94 Stat. 855, provided: "That, under such regulations as the Administrator shall prescribe, each agency shall display in appropriate areas of Federal buildings copies of the Code of Ethics for Government Service.
"Section 2 (a) The Administrator shall provide for the publication of copies of such Code of Ethics and for their distribution to agencies for use under the first section of this Act.
"(b) The Administrator may accept on behalf of the United States any unconditional gift made for the purposes of this Act.
"Section 3. For purposes of this Act -
"(1) the term 'agency' means an Executive agency (as defined by Section 105 of Title 5, United States Code), the United States Postal Service, and the Postal Rate Commission;
"(2) the term 'Administrator' means the Administrator of the General Services Administation;
"(3) the Code of Ethics for Government Service shall read as follows - 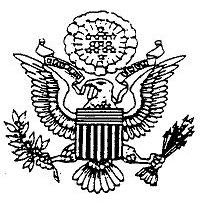 "CODE OF ETHICS FOR GOVERNMENT SERVICE

"Any person in Government service should:

"I. Put loyalty to the highest moral principles and to country above loyalty to persons, party, or Government department.

"II. Uphold the Constitution, laws, and regulations of the United States and of all governments therein and never be a party to their evasion.

"III. Give a full day's labor for a full day's pay; giving earnest effort and best thought to the performance of duties.

"IV. Seek to find and employ more efficient and economical ways of getting tasks accomplished.

"V. Never discriminate unfairly by the dispensing of special favors or privileges to anyone, whether for remuneration or not; and never accept, for himself or herself or for family members, favors or benefits under circumstances which might be construed by reasonable persons as influencing the performance of governmental duties.

"VI. Make no private promises of any kind binding upon the duties of office, since a Governmental employee has no private word which can be binding on public duty.

"VII. Engage in no business with the Government, either directly or indirectly, which is inconsistent with the conscientious performance of governmental duties.

"VIII. Never use any information gained confidentially in the performance of governmental duties as a means of making a private profit.

"X. Uphold these principles, ever conscious that public office is a public trust.

Your agency ethics official and the Office of Government Ethics are available to answer questions on conflicts of interest; and
"(4) the term 'Federal building' means any building in which at least 20 individuals are regularly employed by an agency as civilian employees.
"Section 4. The provisions of this Act shall take effect October 1, 1980. There shall be no costs imposed on the Federal Government for the printing, framing, or other preparation of the Code of Ethics for Government Service under this Act."
Posted by emilynghiem at 5:06 PM No comments:

Bill of Rights - Amendments 1 - 10 and 14 from the U.S. Constitution.
See also constitution.org

ARTICLES IN ADDITION TO, AND AMENDMENT OF, THE CONSTITUTION OF THE UNITED STATES OF AMERICA, PROPOSED BY CONGRESS, AND RATIFIED BY THE SEVERAL STATES, PURSUANT TO THE FIFTH ARTICLE OF THE ORIGINAL CONSTITUTION.

Congress shall make no law respecting an establishment of religion, or prohibiting the free exercise thereof; or abridging the freedom of speech, or of the press; or the right of the people peaceably to assemble, and to petition the Government for a redress of grievances.

A well regulated Militia, being necessary to the security of a free State, the right of the people to keep and bear Arms, shall not be infringed.

No Soldier shall, in time of peace be quartered in any house, without the consent of the Owner, nor in time of war, but in a manner to be prescribed by law.

The right of the people to be secure in their persons, houses, papers, and effects, against unreasonable searches and seizures, shall not be violated, and no Warrants shall issue, but upon probable cause, supported by Oath or affirmation, and particularly describing the place to be searched, and the persons or things to be seized.

No person shall be held to answer for a capital, or otherwise infamous crime, unless on a presentment or indictment of a Grand Jury, except in cases arising in the land or naval forces, or in the Militia, when in actual service in time of War or public danger; nor shall any person be subject for the same offence to be twice put in jeopardy of life or limb; nor shall be compelled in any criminal case to be a witness against himself, nor be deprived of life, liberty, or property, without due process of law; nor shall private property be taken for public use, without just compensation.

In all criminal prosecutions, the accused shall enjoy the right to a speedy and public trial, by an impartial jury of the State and district wherein the crime shall have been committed, which district shall have been previously ascertained by law, and to be informed of the nature and cause of the accusation; to be confronted with the witnesses against him; to have compulsory process for obtaining witnesses in his favor; and to have the Assistance of Counsel for his defence.

In Suits at common law, where the value in controversy shall exceed twenty dollars, the right of trial by jury shall be preserved, and no fact tried by a jury, shall be otherwise re-examined in any Court of the United States, than according to the rules of the common law.

Excessive bail shall not be required, nor excessive fines imposed, nor cruel and unusual punishments inflicted.

The enumeration in the Constitution, of certain rights, shall not be construed to deny or disparage others retained by the people.

The powers not delegated to the United States by the Constitution, nor prohibited by it to the States, are reserved to the States respectively, or to the people.

. . . No State shall make or enforce any law which shall abridge the privileges or immunities of citizens of the United States; nor shall any State deprive any person of life, liberty, or property, without due process of law; nor deny to any person within its jurisdiction the equal protection of the laws.
Posted by emilynghiem at 4:54 PM 2 comments:

emilynghiem
Isocracy is government by equal power or rights. To ensure equal respect for all, we must share equal rights and responsibilities for upholding common standards of law and governance. I find the minimal policies required for public education and enforcement include the Bill of Rights, or Amendments 1 - 10 of the U.S. Constitution, Amendment 14 on equal protection of the laws, and possibly a proposed Amendment on Judicial Freedom, or protecting Consent of the Governed as the basis of just government and all social contracts. In order to prevent abuses of majority rule from oppressing citizens by economic dominance, I believe in requiring mediation, consensus on policy, and proportional representation to address conflicts of interest between parties, so that all decisions and policies are consistent with the above mentioned Constitutional laws and ethics. Since Corporations currently claim dual rights, both as individuals and as collective authorities similar to Government, I also recommend legislation holding Corporations to the Code of Ethics for Government Service (Public Law 96-303), as well as all citizens who wish to claim equal rights under law.

Links will be posted to sites and programs in each district in Houston to coordinate a neighborhood-based process for redressing grievances and seeking restitution for wrongdoing to restore justice, to rebuild communities, and to heal injured relations.

Please email the editor at emilynghiem@hotmail.com if you would like to help to promote public education and participation and to coordinate resources for conflict resolution and restitution in your district or citywide.

Grantwriters, lawyers and mediators, counselors and educators, community advocates and leaders are invited to join in this effort. Thank you!

Equal Protections and Enforcement of Laws

Part of the problem with distrust of government is not only the unchecked corruption due to bureaucracy and power imbalance, but the disproportionate expenditure of resources on policing citizens punished as criminals without equal emphasis on redressing civil grievances and criminal misconduct of government and corporate wrongdoers. As an advocate of restorative justice, I believe restitution is due to taxpayers and citizens who suffer economic and other losses, and which should be remedied by mediation to address and correct the problems, governed by the following standards.

Documents I recommend distributing for public education and for governing mediation and restitution for wrongdoing:
* The Houston Police Mission Statementhttp://www.houstonprogressive.org/hpdmissn.gifCalling for police to involve citizens in all aspects of policing, defined as upholding Democratic values embodied in the Constitution, resolving problems through the enforcement of laws and not through the imposition of judgment or punishment, and working cooperatively with the public and within the framework of the U.S. Constitution to enforce the laws, preserve the peace, reduce fear and provide for a safe environment.

* The Bill of Rights, Amendments 1-10 and Amendment 14 of the U.S. Constitution http://www.constitution.org
Ensuring equal protection of interests, including the right to due process, to security of citizens, and the free exercise of religion, free speech and freedom of the press, with respect to the equal right to assemble in peace and to petition for redress of grievances. To maintain proper checks and balances without distortion or disruption by favoring or imposing certain interests over others, mediation and conflict resolution is required to ensure the consent of all parties, whereby rights, freedoms and interests are protected by law for those parties who agree to respect the same of others, and cannot be invoked under law by those who refuse to uphold the same standards.

* The Code of Ethics for Government Service
http://www.houstonprogressive.org/ethics.html
Calling for anyone in government service to uphold the Constitution, laws and regulations of the United States, never to be a party to their evasion or to favor certain interests inconsistent with public duty, to seek to employ more efficient and economical means of accomplishing tasks, and to expose corruption wherever discovered. By these standards of ethics, the current legal system of waiting for lawsuits or judgments, before stopping corrupt or harmful actions taken against the consent of citizens affected, is inacceptable and does not provide equal protection for citizens without equal legal resources to defend their interests. The wasteful legal, judicial, and criminal justice systems, also violates ethics on economic efficiency compared with mediation and restorative justice programs that have proven more successful and cost-effective in deterring future offenses.